Pavlina Draganova studied at the National Academy of Music “Pancho Vladigerov” in Sofia, Bulgaria in the class of Profs. Konstantin and Julia Ganev (pupil of Heinrich Neuhaus) and Prof. Stella Dimitrova-Maistorova.

After her studies she worked as a piano teacher at the National School of Music and Dance  “Dobrin Petkov” and as a piano lecturer at the Academy of Music, Dance and Virtual Arts in her native city Plovdiv, Bulgaria.

In 1992 she became an accompanist in the Vocal Department of the National Academy of Music “Pancho Vladigerov”, Sofia, Bulgaria.

After Pavlina moved to the USA, she studied and graduated with a Master’s degree in Piano Performance from the University of Michigan, Ann Arbor, USA. There she studied with Prof. Louis Nagel, Profs. John Ellis and Martin Katz. 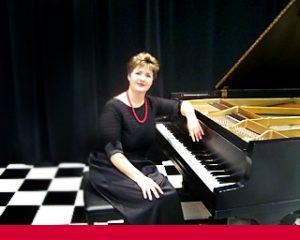 During the years spent in the USA, Pavlina has worked as a piano teacher at King’s Keyboard Piano House, Broughton Music and Arts Center in Michigan. In 2009 she became a staff accompanist at Ashland University working with singers and instrumentalists. At this time she worked as a principal pianist for Ashland Symphony Orchestra in Ashland, Ohio.

As an active performer Pavlina has played solo and in collaboration with other musicians in Europe and in the USA.